After the recent sacking of Jose Mourinho and Ryan Mason only in temporary charge, who is next in line to take over at Spurs?

Jose Mourinho was brought in, in November 2019 to replace Mauricio Pochettino. The Portuguese manager came with a big reputation as a manager who won trophies wherever he went. This was true, at his last six jobs he has won trophies at all of them which included the Champions League, Europa League, Premier League, Serie A, La Liga, and many more. However, he also had a tendency to fall out with players and also go through a huge dip in form.

Unfortunately for him, this would again happen at Spurs, but without the trophy. Mourinho was sacked as Spurs manager after just 17 months, but what was most surprising was it was done on the week of the Carabao Cup final. Mourinho had been brought in to win get them to finals and wasn’t given the chance to do it. Unsurprisingly Spurs would go on to lose this final, as Spurs tend to do, and give Man City their fourth consecutive Carabao Cup trophy.

Currently, former player Ryan Mason is now in charge of things at Spurs but it’s not a permanent role. Chairman Daniel Levy is giving himself as much time as possible to find the right man to get Spurs challenging for the top four at least!

Whoever comes in is going to have a big job on their hands. Spurs are finished seventh place in the Premier League and won’t be in the Champions League next season. It is now harder than ever to get into the top four and with Harry Kane potentially leaving the club this summer, it makes it an even more difficult job!

The former Spurs manager is apparently in talks with his former employers about a shock return to the club. Pochettino was sacked halfway through the 2019/20 season and replaced by Jose Mourinho. Many of the Spurs fans weren’t happy with this decision, especially after he had got them to the Champions League final the season before.

Currently, he is at PSG but has only been there for six months. They didn’t win the league this season, which was a huge shock. Harry Kane worked very well under Pochettino and they had a great relationship, could he be the one to make the striker stay?

Pochettino knows the club inside out and there would be less doubt about whether he would fit the club having already been there.

The ex-Chelsea manager left his job yesterday at Inter Milan after a disagreement with the board in terms of funds this season. He is now available and would be a great signing for Spurs. He won the league with Inter, which was a fantastic achievement stopping Juventus from winning it again.

Before that, he won the Premier League with Chelsea. He is a winner wherever he has been and could be exactly what Spurs and Harry Kane are after!

The Dutch manager is currently in charge of Ajax and has been since 2017. He won the Eredivisie in his second season in charge and also won the league again this season. Ten Hag made himself known to the footballing world when he guided his side to the semi-finals of the Champions League in 2019. Ajax beat Juve and Real along the way and missed out of the final due to a 96th-minute goal by Lucas Moura.

What ten Hag has also done impressively is managed to rebuild his sides despite losing key players in De Jong, Van De Beek and De Ligt. If Spurs do lose Kane this summer they will need a man who can find a way around this and ten Hag could be the one. He has one year left on his contract at Ajax so Spurs could pay a small fee to bring him to the club. 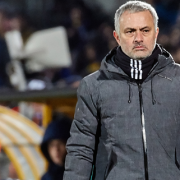