Liverpool, Man United, Man City and Everton all avoid each other to set up potential derby day semi-finals!

This week saw the round of 16 games played in the EFL Cup. There were some big games to be played, with Liverpool playing Arsenal and Chelsea taking on Man United. The other six games saw Colchester, Oxford, Aston Villa, Man City, Everton and Leicester through to the quarter finals.

This was the most entertaining game of the round by a long way. Both sides fielded fairly in experienced teams with full debuts being given out by Klopp. It is no secret that Klopp is not a fan of this competition and many thought he was trying to get out of it by playing such a young side.

The game got off to a good start for the host with Mustafi scoring an own goal after five minutes. This lead didn’t last long though and Arsenal were 3-1 up after 36 minutes. Arsenal conceded one more though and went in 3-2 up at half time.

It was Liverpool’s turn to win the half 3-2 now, with Origi scoring in the 94th minute to make it 5-5. The game went straight to penalties with Liverpool winning that 5-4 and going into the quarters. Arsenal would have been very disappointed to lose this having been 3-1 and 4-2 up in the game.

Both managers in this game took it far more seriously. United fielded nearly a full strength side with Chelsea having six first team players starting.

United went in 1-0 up at half time and were the better side. The goal coming from a silly tackle from Alonso on James, with Rashford converting the penalty. Chelsea though got back level in the 63 minute from a great solo goal from Batshuayi.

It looked like United had ran out of ideas and Chelsea were definitely more likely to score. However, the visitors got a free kick in the 73rd minute. Up stepped Rashford to score one of the best free kicks you’ll see the season putting it top corner fro 30+ yards out!

United went through as 2-1 winners, hoping to add some silverware to their season.

The games for the next round were drawn on Thursday morning:

Many thought the draw was fixed as it could now be possible that Man United draw Man City in the next round and Everton draw Liverpool. If this was the case this would be a fantastic semi-final as it would see two huge derby’s take place. This does seem a little to good to be true…

However, Liverpool may not even play in the quarter finals due to a busy schedule. They are playing in the Club World Cup the same time they are meant to play Aston Villa. The EFL are trying to re-schedule it but it doesn’t look possible. Klopp has said his side won’t miss the Club World Cup, meaning they would have to forfeit their place in the EFL Cup. There has been conversation about Liverpool playing two different teams on the same day so they can get both fixtures played!

Man City are the favourites to win the competition at EVS on Betfred. United are surprisingly ahead of Liverpool at 4/1 with Klopp’s side at 9/2. This will be due to Liverpool and Klopp’s issue with the next round so this could make for a fantastic bet at such good odds. 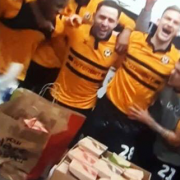 How Far Can Leicester Go This Season?
Scroll to top