The implementation of Video Assistant Referee (VAR) in the Premier League has largely been met with anger, as frustrated fans struggle to fully understand the new system. However, this dissent is seemingly not aimed at the concept itself but rather its cumbersome implementation.

A recent Statista survey shows that just 43 percent of British respondents wished for VAR’s continuation – a startlingly low number when looking at other major European leagues where, on average, over 60% of fans favoured it.

The Italians are the most pro-VAR nation, with 71% of supporters wanting it to remain; VAR is also popular in Spain, with 69% of fans responding positively to the technology. 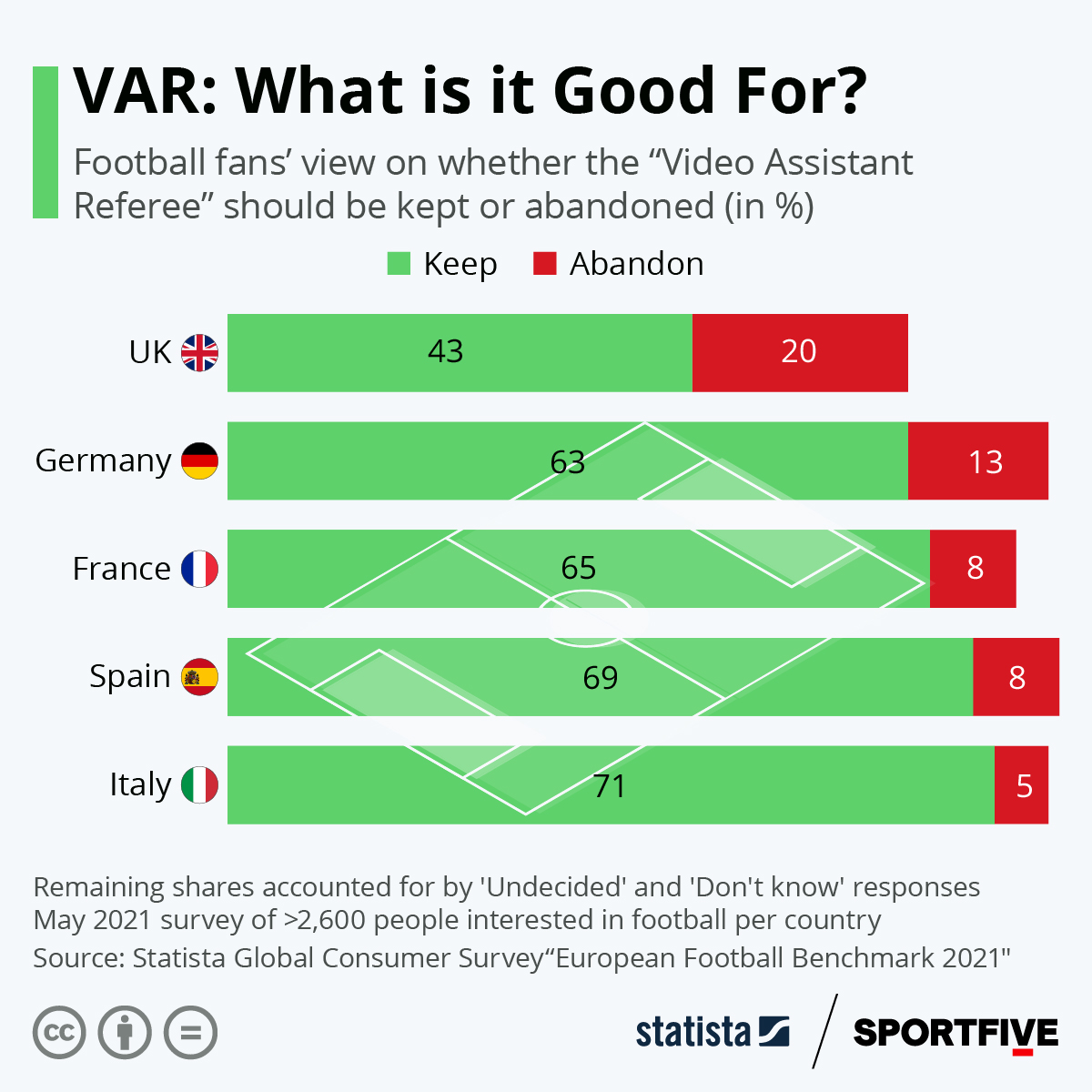 You will find more infographics at Statista

VAR is a video replay system where referees can review footage of possible wrongdoings and correct their decisions if necessary. VAR was conceived in the early 2010s during a project by Dutch football officials. They first tested it through mock trials during the 2012-2013 Eredivisie season.

The technology failed to gain widespread support until its introduction at the 2018 World Cup in Russia, making it one of the most talked-about topics during the tournament.

VAR was trialled for the first time in England in an FA Cup game between Brighton & Hove Albion and Crystal Palace in the 2017-18 season. In November 2018, the Premier League clubs came to a unanimous decision to introduce VAR into next season’s games with some restrictions.

Some football fans say that the introduction of VAR has caused the game to slow down, as every challenge reviewed takes around 15 seconds.

A new survey by the Football Supporters’ Association found 95 per cent of soccer fans believe video officiating has made football less enjoyable. Supporters pointed to the joy of goal celebrations being diminished and delays in decision-making as their chief concerns, with 44 per cent of regular match-going fans claiming they would be less interested in attending games because of VAR technology.

The latest polling in the UK shows that fans are split on whether or not to remove VAR. Although overall, support in Britain is lower than other major European leagues, many people lauded VAR when introduced as a move in the right direction for football. Still, its implementation has been less than perfect.

Chelsea To Parade Champions League Trophy At Home Against Spurs!
Scroll to top