The Manchester derby has always been an unpredictable affair. On Sunday, United host City currently trailing by 8 points but will be confident they can take the game to their opponents and inflict City’s first league defeat of the season. We look at five of the best and important derbies in recent time.

A game that is remembered by many for an altercation between Gary Neville and Steve McManaman. The former United full back was sent off in the first half but United coped and second half goals from a young Cristiano Ronaldo and Ruud Van Nistelrooy saw them progress and push them towards what was ultimately a winning Fa Cup campaign.

A day when the city of Manchester was truly United. The focus pre-match was on remembering those that died in the Munich air disaster in 1958. City were the ones that rose to the occasion in the end and goals from Vassell and Benjani won it for them. United recovered well after this and went on to a Premier League and Champions League double.

With the huge investment really starting to take effect, City travelled to Old Trafford holding a 2-1 lead and hoping to win their first trophy since 1976. The game started off at a frantic pace but it took until the 2nd half for the goals to arrive. Goals from Michael Carrick and Paul Scholes gave United the lead before Tevez levelled it on aggregate. It took a late Wayne Rooney to seal the tie and send United to Wembley.

The 6-1 thrashing earlier in the season is probably remembered more fondly by City fans but this game was more important. Vincent Kompany scored the only goal before half time and City held out to go top and put them within touching distance of winning their first title in 44 years.

The build up to the game was on Carlos Tevez and him returning to Old Trafford for the first time in a blue shirt. The match itself was regarded by many as one of the greatest Premier League matches of all time.  United went in front on three occasions but City equalised each time. In the 97th minute, Ryan Giggs set up Michael Owen who won the game and sent Old Trafford wild. 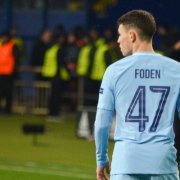 No Salad On The Mo Salah
Scroll to top