The Europa League is down to its final eight teams, but which team is the favourite to win this year’s competition?

The final Round of 16 ties in the Europa League took place last week with some big names still in the competition. With places in the Champions League being so hard to get now, especially in the Premier Leauge, teams are looking at winning this competition as their route in!

The final this year is on May 26th and is being played at Stadion Miejski in Gdansk. Last years the winners were Sevilla, who have won the competition four out of the last six years. They aren’t in it this year after progressing through the group stages of the Champions League.

This season favourites were last seasons also seasons but fell short in the semi-finals of the competition. United beat Granada 4-0 on aggregate in the previous round and take on Roma in the semis. They have managed to avoid Arsenal also, until the final, should both teams get there.

United have the best squad in the competition and should be the favourites for it. One thing that could go against them is the fact they have been to four semi-finals now with Solskjaer and not won any. This will play on their mind but they will be desperate to right their wrongs. The pressure is on Solskjaer now and he has to at least get to final soon!

United will want to be in the Champions League next season and are currently second in the league. It looks like top four is pretty much secured for them in the Premier League and they can now start focussing all their attention on winning their first trophy under Solskjaer.

Arteta’s side progressed through to the semi-finals, having beaten Slavia Prague 5-1 over two legs. They face Villarreal in the next round, who are managed by their former boss and three-time winner of this tournament as a manager Unai Emery.

Arsenal have already tasted success under their manager, winning last seasons FA Cup. Questions have been asked whether he is the right man for the job though given their league form. Arsenal are ninth in the table, nine points off of the top four. Their best chance of the Champions League is winning this. If they get through to the final, they will face either Man United or Roma. They should have a good chance of making this years final and will hope it won’t be a repeat of the 2019 one!

The Spanish side took on Dynamo Zagreb in the last round, which finished up as them winning 3-1 over the two legs. They have drawn Arsenal, in the next round which will be a tough fixture for the Spanish side.

Unai Emery’s side has never won the Europa League nor have they been to the final. However, their manager has won this competition three times so knows what it takes. Villarreal have a good squad full of underrated players. Going away to them would be a tough game and a couple of good draws and they could be right amongst the favourites.

The Italian beat Ajax to get to the semi-finals of the Europa League. The tie finished 3-2 on aggregate, with Roma winning the first one 2-1. This how now set up semi-final against Man United and has put them bottom of the odds to win the competition.

Roma have never won the Europa League before and this is the furthest they have ever reached in the competition. It’s going to be a big ask for them to win this as it would most likely include beating United and Arsenal. However, they do have a good squad and are doing well in Serie A. 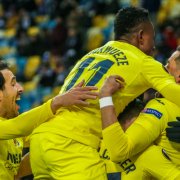