Man City now have an even bigger mountain to climb if they are going to win the Premier League this season.

Pep Guardiola’s side dropped more points this weekend as their inconsistent start to the season carried on. They started off the season with a 5-0 win against West Ham but then drew to Spurs at home in the next game.

Since then they have also lost to newly-promoted side Norwich. Comparing this to last season, it has been a lot worse. City took until December to lose their first game of the season whereas this year it took only till September. The Champions also only lost four games last season and this year have already lost two. This is without playing Liverpool, Chelsea, Man United or Arsenal yet!

Yesterday loss came to Wolves. Last season Wolves drew with City at the Molyneux and this season has gone one better at the Etihad. City were 1/7 to win the game and controlled it for the large majority. However, Wolves defended well and this allowed for winger Adama Traore to give them the lead in the 80th minute. He then doubled the lead with a carbon copy of his first goal in the 94th minute. This defeat left them second, one point ahead of Arsenal.

Liverpool, on the other hand, are flying this season. They are now top of the Premier League by a staggering eight points. This is the biggest lead ever at this stage of the season. Chelsea had the record which was 5 points at this stage in 2014/15.

Newcastle (95/96), Man United (99/00) and Chelsea (13/14) have also leads of four points at this stage before. Out of these four though, only two have gone on to win the Premier League. Liverpool has been in a similar sort of situation before. They were seven points clear at the end of December last season, and City still won the league by one point.

Liverpool’s most recent win came over Leicester on the weekend. The home side took the lead but then Leicester equalised through the inform Maddison. Klopp’s side left it late but got the three points thanks to a last-minute penalty converted by Milner.

This season is going to be very interesting. City now can’t afford to drop any more points and Liverpool needs to prove they can win the league. Liverpool is not the favourites on Betfred at 4/6. Man City have dropped just behind them at 13/10. 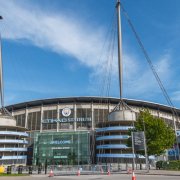