Life for Newcastle United fans could be about to get a whole lot better. For 14 years they have had Mike Ashley in charge, who has been very unpopular, to say the least. Whilst the owner of the club, they have been relegated twice, had several poor managerial changes and he even changed the name of the stadium to the Sports Direct Arena. There have been many bad decisions on his behalf which has led to years of protests from the fans.

Last week, a deal was agreed between Ashley and the new owners for a fee of £305 million! The new consortium has several co-owners, one of which is the Crown Prince of Saudi Arabia, Mohammed bin Salman, who is said to be worth a staggering £320 billion! To put this into perspective, this is ten times more than Man City‘s owners!

With new owners, Newcastle fans are very excited and rightly so. Their last major trophy was back in was the FA Cup in 1955. They are one of the biggest clubs in the country, with a fantastic fan base and one that should be doing a lot better than they are!

Now with new owners comes a lot of hope, even of going all the way in the Premier League. BoyleSports have a selection of specials for the upcoming seasons for Newcastle and where they could potentially head.

This would be a huge ask for them to turn it around in just one year, but when you have £320 billion, who knows what you can achieve. Their best-ever finish was 2nd back in 1995 and 1996. In their last nine seasons though, their best was 10th place. It would take a lot for them to beat the likes of Man City, Liverpool and Chelsea to a title next year. However, with that amount of money, could they do the impossible and maybe even emulate Leicester in 2015/16.

Newcastle are currently sat in 19th place in the Premier League with no wins yet this season. The pressure is mounting on manager Steve Bruce now who looks like he could be set to lose his job. Newcastle really haven’t performed well this season and with the January transfer still, three months away, the games between now and then are huge. They could put themselves into a relegation fight between now and then, meaning the next transfer window would be huge. When the new owners bought the club, playing in the Championship next season wouldn’t have been on their mind at all.

Now, this is an interesting one. Everyone involved with the club is desperate to bring success back to the North East. With the FA Cup though, a lot of the ‘big teams’ aren’t that interested in it. You will see them played weakened teams up until the semis/final as they all concentrate on the Premier League and the Champions League more. However, Newcastle wouldn’t be picky and this is something they can really go for. if they can bring in a few quality players over the next three windows, there is no reason why they couldn’t win this competition. 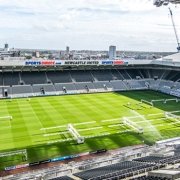