As Sheffield United trained on a park next to Anfield, a dog interrupted their training session by using their cones as a toilet!

Last night Liverpool hosted Sheffield United in the last of the festive fixtures. As with most games, teams will do some sort of light training before the game. Usually, this is to go over specific things such as tactics and set pieces.

The Blades were away, they didn’t have the use of their usual training ground, Hallam FM Academy. Due to this, they had to make do and trained on Stanley Park. This is right next to Anfield and is just a public park that anyone can use. During the middle of their session, a dog ran over and starting urinating over their cones!

Whether this got disrupted their session or not, Liverpool certainly got the better of them on the night. They took the lead after just 3 minutes 25 seconds. This is their earliest goal this season and Salah’s 50th left-footed goal in the Premier League.

Liverpool doubled their lead in the second half through Sadio Mane. A one-two with Salah and a bit of luck from the save of Henderson meant the ball fell kindly at the Senegalese forward’s feet.

This was a very good performance from Liverpool who took control from the start. This win rounded off a year since Liverpool were last beaten in the Premier League. Maybe Sheffield United can’t blame the dog but just the fact that Liverpool are in fantastic form this season.

Just trying to do an activation session in peace 🙄😂#SUFC 🔴pic.twitter.com/YCgPgp9LIo

Liverpool top of the league

Their 19th win of the season out of 20 games now sees Klopp’s side 13 points clear of Leicester at the top. To make this even more impressive they have a game in hand on everyone else too. The season, in terms of the title, is as good as wrapped up. Liverpool is now 1/33 to win the league on Betway.

We’ve seen Liverpool lose leads before but not one as big as this with a side as good as this. They will have one eye now ongoing unbeaten in the league, but this depends on how they are progressing in the Champions League. Should they get far then no doubt Klopp will bring in some of the backup players to allow his main players to rest.

They are the joint-favourites to win that competition at 4/1 with Man City. Given they’ve been to the last two finals and won last years, then you wouldn’t be surprised to see them there again. 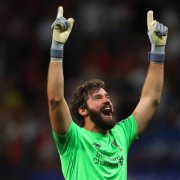 Mourinho Rude To “An Idiot”

Rooney Returns To English Football With Derby
Scroll to top