Spurs took on Olympiakos on Tuesday night in the Champions League group stages. A win for Jose’s new team would send them through to the last 16 of the competition. This was going to be a special night as it was the new managers first game at home.

The home side were heavy favourites for this game at a price of around 1/4 at most bookmakers. When the two sides met earlier in the competition, the game finished 2-2. Spurs took a 2-0 lead away but managed to let it slip in the second half.

Jose’s side needed to win this game as they already have a busy December, and don’t need a must-win in their next Champions League game.

This didn’t go to plan and the away sound found themselves 2-0 up after just 19 minutes. A fantastic long-range finish from El-Arabi and a simple tap in by Semedo due to awful defending and the visitors were in dreamland.

Mourinho didn’t hang about and after 30 minutes withdrew Eric Dier. He spoke about this after the game saying he felt awful but in that moment the team needed attacking midfielders so brought on Eriksen.

Dele Alli got a vital goal from another piece of awful defending. The Olympiakos captain failing to clear his lines and Alli was there to tap it in. This was massive going into half time and would change the team talk of both managers.

Mourinho new the next goal would be massive and important to get it quickly. Spurs came flying out the blocks second half and got the all-important equaliser after five minutes. The replays showed this was all thanks to one of the ball boys. The ball went out for a throw-in and he threw on a spare ball so Spurs could restart quicker. This was pivotal as it allowed Spurs to catch the visitors by surprise and allowed Lucas to set up Kane. Jose loved what he did and could be seen going over and celebrating with the youngster.

Spurs kept up the momentum and went on to win the game 4-2.  After the match, Jose was very complimentary of the ball boy. He said he did a fantastic job and it was great to see him analysing the game and not just looking at the crowds. Mourinho revealed that he tried to invite him back to the changing rooms afterwards to celebrate but he couldn’t find him.

Now Spurs have qualified for the round of 16 they can look forward to knock-out football. If they play like they did the second half they could get to the final once again. Betfred doesn’t see Spurs winning it though, even under the Special One. They currently have them priced at 22/1. 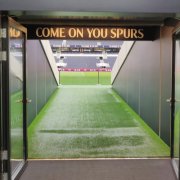