West Ham just managed to hold onto the three points against Fulham on Saturday, thanks to one of the worst penalties we have ever seen!

The Hammers hosted Fulham on Saturday night, with the away side looking to kick on after their first win of the season last week. This was a big game for both sides with wins for either taking them comfortably away from the bottom three.

West Ham were without their main striker Michail Antonio. This was a big boost for Scott Parker’s side who had their main striker in Alexander Mitrovic back in their starting line up. He was accompanied by Ademola Lookman, who would go on to play a huge part in the game, for all the wrong reasons…

Lookman joined Fulham this summer on loan from RB Leipzig. The 23-year-old start at Charlton, where he impressed a lot of clubs in England, before moving to Everton for £7.5 million. He struggled at Everton and joined Leipzig on loan who eventually bought. Again this move then lead to a loan spell back in England at Fulham.

The young winger has one goal in four appearances so far and has shown flashes of brilliance for Scott Parker. However, Saturday night will be on night he hopes to forget as soon as possible.

The game was a close one with West Ham having the better of the chances. The hosts were denied by the woodwork several times and it looked like it was going to finish 0-0. In the 91st minute, Tomas Soucek gave his side the lead with a calm finish inside the box passing it into the bottom corner.

It was heartbreak for Fulham had worked hard and a point would have been massive for them. With a minute left Fulham threw everything forward and were awarded a penalty when Benrhama fouled Cairney in the box.

Now usually Mitrovic would take penalties but his hamstring was bad. Strangely, Captain Tom Cairney didn’t take it, so up stepped new boy Ademola Lookman. Now clearly he was either feeling very, very confident, or he had been watching Pirlo penalties the night before. Lookman stepped up and instead of smashing it, probably the safest option, he decided to panenka it down the middle.

This didn’t go to plan as it looked like his kicked more floor than the ball and his penalty flew slowly into the arms of Fabianski and West Ham held on for a 1-0 win! Were not sure if we have ever seen a worse penalty than this, given the circumstances. Fulham needs every point they can get and the new signing will certainly not be a popular figure at the Fulham training ground right now!

The loss now puts Fulham one point above the bottom three, with Burnley having a game in hand on them and being able to swap places. Fulham are the favourites now for relegation this season at 1/3. They have won just one game in eight and have probably the weakest squad in the Premier League.

Scott Parker will not be thinking this way and will still have faith he can keep his side up. However, he may not have much choice if Fulham decides to let go of him. He is 13/5 to be the next manager to be sacked in the Premier League, with only Solskjaer (EVS) and Bilic (21/20) ahead of him in the odds.

However, there is still a long way to go in the Premier League season. Clubs around Fulham are struggling too and a few good results could see them move back up. They are currently 9/5 to stay up this season. 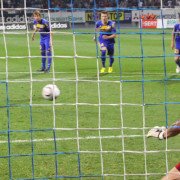